Adopting Permit Software & 5 Other Actions to Address the Housing Crisis

The housing affordability crisis is just that - a crisis. In Canada, 75% of people that want to own a home can’t afford to, while an estimated 61% of U.S. renters can’t afford to buy where they live.

The cost of an average home is seven and nine times the average household income in the U.S. and Canada respectively, making many question the very feasibility of owning at all.

But - all hope’s not lost. There are many steps that governments can take now to address the affordability crisis, and many are already underway. Federally, in both the U.S. and Canada, housing affordability is a top priority. The Canadian government has set aside $10B in its Housing Plan to address the issue ($4 billion of which is specifically set aside for municipalities to update their zoning and permit systems), while the U.S. has announced a Housing Supply Action Plan that includes leveraging existing federal funding to encourage reforms to zoning and land use policies among other initiatives.

It’s going to take a collective, multi-pronged approach to do something about the lack of affordable housing, and it’s not going to be easy. Factor in added complexities like the increased number of investment firms buying up single-family homes, and homeowner pushback for new developments or policy changes that they believe could devalue their property, and you can start to see why progress so far has been slow.

The following 6 actions are just a fraction of the steps governments will need to take to cool prices and build more homes - starting with improving the permit approvals process.

One of the first steps for a developer after acquiring a plot of land is to get permission to build. Seems simple enough, but for many developers, it’s the most arduous part of the process. Especially if a city doesn’t have an effective land management system in place, getting a land use or building permit can take months or even years, driving up a developers’ upfront costs, and in turn, the base cost of the home(s) being built. Particularly when you factor in inflation and rising interest rates and material costs, costs associated with delays can add up fast.

There are two ways governments can address this. First, is to adopt permit software that improves and speeds up the approval process - either a land management solution or building permitting solution depending on the intended use case - and second, is to prioritize and expedite approvals for affordable housing projects. Combined, the use of permit software and a process for further speeding up affordable housing projects could cut permit approval timelines down to days. And as a result, new homes could be built faster and at a lower cost to developers.

Find out more about how permit software supports quicker building and land use permit approvals in this buyers guide.

In many cities across North America, the most desirable and central neighborhoods tend to share a similar characteristic: long-standing single-family zoning restrictions.

As is explained in California YIMBY’s graphic, to upzone single-family areas, it’ll take both education for the public on the difference between overcrowding and density, and a regulatory shift to encourage density by way of loosening restrictive land use regulations, and allowing developers to build up, not out, in single-family areas. 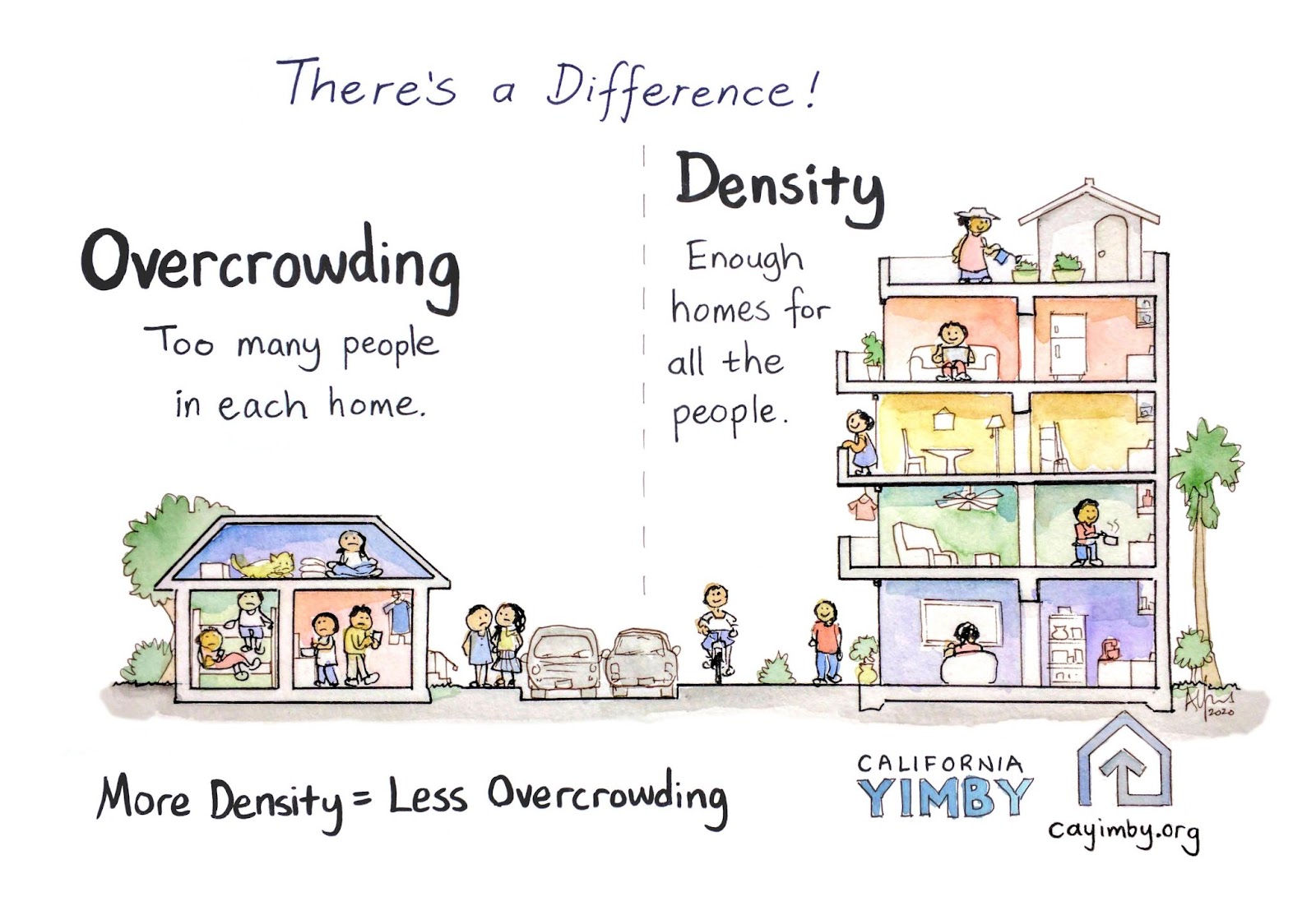 A step further to upzoning single-family areas is to remove regulatory barriers on a wider scale. This may include reexamining minimum lot sizes to allow more units to be built on a parcel of land, rezoning commercial areas to allow for residential or mixed use development, or assessing underutilized public lands that could be zoned for new housing development (whilst still upholding rigid environmental protection and conservation policies, of course).

In doing so, more homes could be built, which could lower prices by boosting stock. Despite what skeptics of the supply shortage might say, as the NYU Furman Center explains in a report, “Both theory and empirical evidence [has shown that] adding new homes moderates price increases and therefore makes housing more affordable to low- and moderate-income families.”

Building isn’t cheap, and any costs developers incur during the construction process get passed on to future occupants in the form of higher rents or purchase prices.

Margins to break even can already be slim for units or homes built to be sold or rented at market rate, so understandably from a pure cost perspective, developers are less likely to build affordable homes, as the less they can charge for the finished product, the lower their profit.

To mitigate this, governments can encourage developers to build more inclusionary housing with incentives such as:

Manufactured or factory-built housing is less expensive per square foot than new or existing site-built homes - by as much as 47% according to a study from the Urban Institute. Yet, they only account for 6% of the United States’ housing stock, and a similarly small percentage of dwellings in Canada.

Largely, this low percentage can be attributed to the stigma around manufactured home communities, or trailer parks as they’re more commonly known. There were also valid concerns over the quality and safety of the homes in the past too, although these are no longer relevant today.

‘Trailers’ as they’re more commonly known aren’t actually trailers anymore as the Financial Post explains: “Instead of axles and wheels, buyers get factory-built-to-code, energy-efficient homes set on concrete blocks, and they range in size from about 500 to 1,800 square feet, and in price from $120,000 to $350,000 (or even more) for ultra-deluxe models.”

Manufactured homes not only offer a more affordable option for lower to middle income families, but can offer numerous other benefits, including: reduced material and financing costs, opportunities for advances in energy efficiency, and fewer to no construction delays due to materials being protected from the elements in a factory environment.

Evidently, although manufactured homes aren’t going to solve the housing crunch on their own, they can take some pressure off by providing an attractive option for buyers in areas outside of cities.

In a piece for the Canadian Centre for Policy Alternatives (CCPA), Senior Economist Marc Lee argues that we can’t rely on private-sector developers alone to build enough affordable housing.

“We are often told that building affordable housing is just too expensive: land prices are too high, construction costs are rising, development fees and labyrinthine bureaucratic processes are stifling projects. There is some truth in each of these explanations, but to really get a major build-out of affordable housing we need to stop relying on the current private, for-profit approach. To achieve the public goals of affordable housing—and the related social and economic benefits—we need to expand the stock of non-market and co-op housing with public-led approaches and non-profit development.”

Public sector or non-profit developers can not only pay for new projects with the rents later earned, but have the added advantage of access to low-interest loans that can be paid off over decades. This extra long repayment option means that there’s more time to accumulate the money needed to pay off the upfront development costs, and that rents can be offered at below-market rates.

Evidently, the solutions are there - it’s just a matter of collective action to achieve them.

Previous Story
← 5 Change Management Strategies for Permit Software Implementation
Next Story
The Promise of Manufactured Housing: Will It Work? →