In response to the housing affordability crisis and changing climate, governments across North America are making much needed changes to zoning regulations and building codes aimed at two things: increasing housing supply with more flexibility, and ensuring existing structures are safe and energy efficient. Changes that, while positive, put pressure on building departments to make updates to their permitting systems - a potentially complex task depending on the technology in place (or lack thereof).

Home-grown systems or those that are heavily reliant on code and customization simply aren’t agile enough to meet current permitting demands. Changes, even those small in scope, can require custom development, and take weeks, even months to complete.

Alternatively, with a highly-configurable permitting system in place, processes can be repeated, and making a change of any size can be as simple as clicking a button - no code required. Whether a permit workflow needs to be adjusted to include an additional step or reporting requirement, or a fee increased, the change can be actioned within minutes by staff. Plus, as more permits and workflows are created, the easier it becomes to find one in the library to clone. It’s just a matter of copy and paste.

Here are just a few examples of changes that can be made within minutes using a highly-configurable permitting solution:

This sort of system flexibility, as seen in this Orange County, California, webinar for example, is vital for government departments in charge of permit issuance, especially as changes become more frequent in the face of the housing and climate crisis. Having the right building permit software in place should be a top priority.

How Orange County Created a New Permit Type in 1 Day

According to research from Realtor.com, the U.S. was short around 5 million homes in 2021, which, in addition to other factors like restrictive zoning laws and rocketing price appreciation, contributes to the housing affordability crisis. For this reason, governments are looking for ways to speed up the building process, and get rid of red tape that limits new builds.

Just look at what happened in California with the passing of bills AB-68 and SB-9. Counties were left to make complex changes to their permitting process in order to meet new state requirements. The positive intent was there - to allow for more homes to be built in smaller spaces, and for land to be used to the fullest extent - but the process to get there wasn’t straightforward, and ultimately landed on building departments’ plates.

These bills, passed in early 2020, made it easier to build small homes known as Accessory Dwelling Units (ADU’s) and Junior ADU’s (JADU’s) (Figure 1), and for lots to be subdivided to allow for additional homes to be built on a single parcel of land (Figure 2). The results? A green light for residents to build additional dwellings on a single lot, and regulatory changes that required departments to create a new permit type, and prepare for an expected spike in applications.

Though somewhat similar to other building permit types, the changes to the ADU and JADU permitting process and lot subdivision rules were complex, and required new permit subtypes, updated application steps, fees, and reports to be shared with the state and executive stakeholders. Not insignificant changes for the 6th most populous county in the U.S. to make.

Admittedly, as OCPW Permitting Manager Judy Kim explained in a webinar highlighting the county’s flexibility, despite full confidence in their highly-configurable permitting and land management system, she was surprised at just how easy it was to update their existing process.

In less than a full work day, Judy and her team were able to clone a similar approval workflow (Figure 3), and make necessary edits to their online application form, review steps, permit fees, address-creation process, and inspections requirements. They were also able to create a new set of reports to send to state regulatory bodies who wanted to track ADU applications - something that used to take a full-time employee to manage. All it took was a few minutes to select the data to be used in the reports, and the click of an export button to share via email. 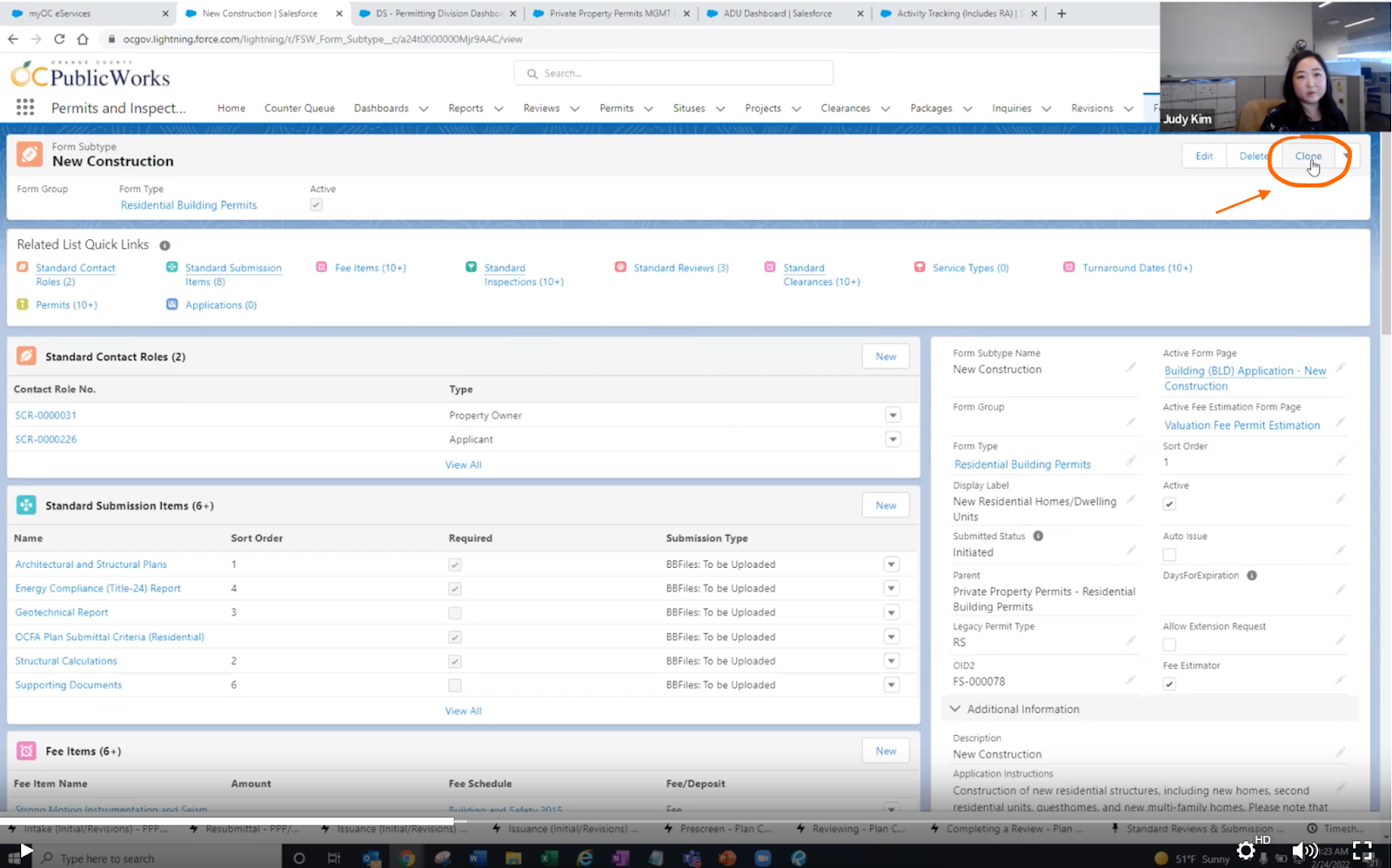 For ADU’s specifically, OCPW wanted to ensure that data such as the total number of units, and whether the property was owner or renter occupied, was included in the department’s everyday reporting, and automatically tracked on a dashboard for visibility (Figure 4). An easy task using their current system’s built-in reporting capabilities and drag and drop dashboard builder. 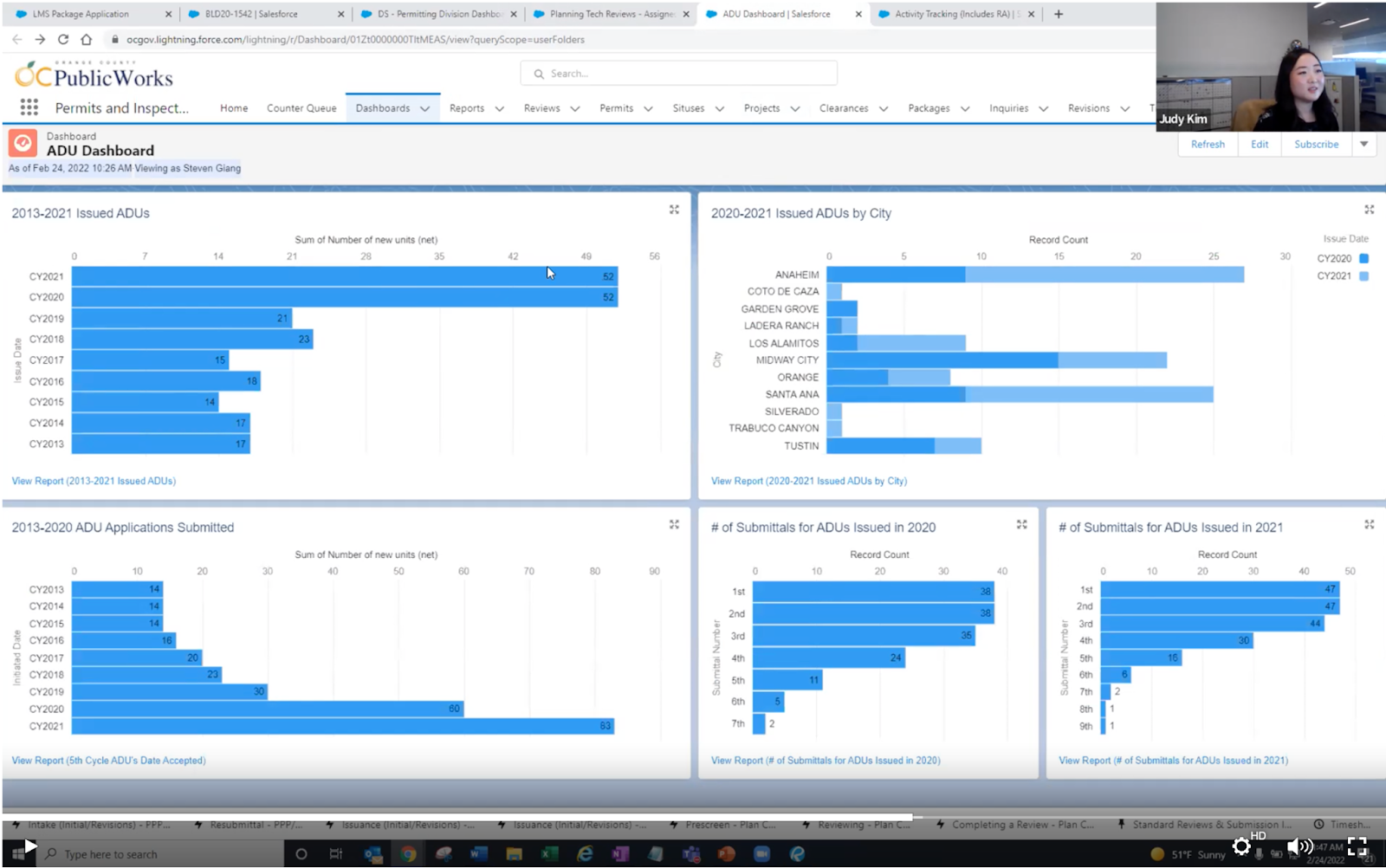 Conversely, had the county still been using their previous custom-built system that lacked extensive reporting capabilities and flexibility (staff could only run very basic reports without help from IT) they would have had to ask IT to build them custom reports, and go through a complicated change order process to make even the smallest update to their permitting workflows. A process that, as county Permitting Manager Laree Alonso explained, “would’ve taken weeks, maybe even a month or two [with their old, home-built] system,” but can now be completed within hours or minutes.

Evidently, as with the example of the State of California initiating changes that fell to the Orange County Public Works Department to figure out, configurability is key when selecting permit software. It can mean the difference between minutes and months to react to a regulatory change, and can better equip staff to adapt and succeed, whatever the demand.